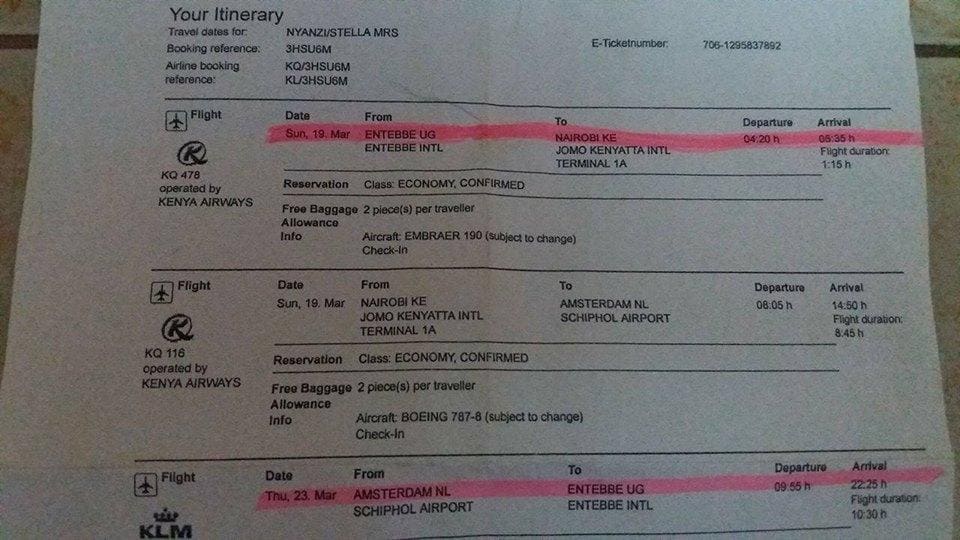 At Entebbe Airport, on my way to University of Amsterdam for an academic conference entitled ‘Dissident Desires – Africa/ Asia: Critical Comparative Analyses on Gender and Sexuality’, the sweet looking tiny immigration officer double-checks her computer screen after screening my right hand. She quickly rises from her seat, leaves her booth and marches to another booth with a bigger lady. They return together to the first booth, besides which I am standing. Again they stare at the hidden computer screen. The fat lady whispers something under her breath and leaves.

The sweet looking tiny lady looks up at me, rubs behind her big glasses, and says, “First wait, there is a small problem!”

“Yes. I need to consult my supervise,” she says while still rubbing her spectacles.

“Can I at least sit down?” I ask, as I think of my bad foot hurt last weekend while refereeing my sons’ football.

“Okay. But you still have my boarding passes,” I say as I limp towards some chairs right next to the immigration gates.

So… I am sitting here and waiting, waiting, waiting. My foot hurts. I don’t know what is wrong. I don’t know what the hidden computer screen said about me. My passport has been held. My boarding passes have been held. This is intrigue! This is intimidation by the state. The suspense is killing me. My plane will start boarding at 02:20AM. Big-bodied immigration soldiers in blue have come. They are speaking in phones. But still I am waiting and typing furiously… Stupid state with stupid computers carrying stupid information on their stupid screens…

UPDATE:
Escorted by two big-bodied police officers, the supervisor on duty of immigration has explained to me that the person who ordered for my earlier summons at CID has barred me from travelling unless I return to CID and get cleared. Cleared?? Cleared my arse!!

Shame on Yoweri Museveni Kaguta. He complained about my Facebook posts about his corrupt and dictatorial regime, summoned me to CID, and has now blocked my free travel to perform my academic duties. Yoweri Museveni is raping my human right to freely move in this world. Museveni is a rapist. The Dutch embassy gave me a visa to enter their country. The University of Amsterdam paid for my travel and accommodation. Museveni, CID mercenaries, police zombies and immigration mafiaso are gang raping my human rights as a citizen of Uganda. Somebody stop the rapists from painfully violating me.

I have refused to leave the airport until my flight departs for Amsterdam via Nairobi. I have the constitutional freedom and right to travel. Ugandans have been taken ranson by dictator Museveni and his imbecile mercenaries. How can they take away a mother’s remaining food basket, yet they took her only cow away from her? Will Museveni feed my daughter and my twin sons? Museveni fucked up my job at Makerere University with his untenable executive order. He is now fucking up my international travel for academic conferences. May the gods curse Museveni. May all the twins in Buganda burn him and his mercenaries. May Jehovah kill him slowly and painfully. Fuck you Yoweri Museveni for making me a prisoner in my own home.