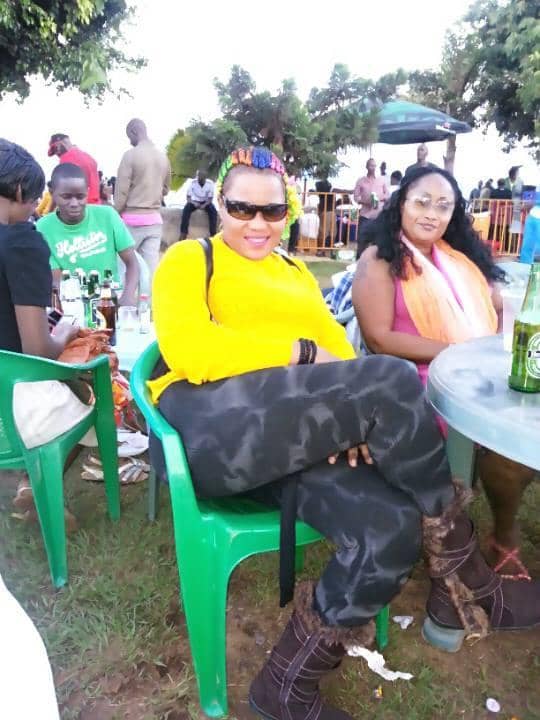 Adomati Robert From Masaka road accidents to “free fall-men suicides” from tall buildings in the city, what’s happening in Uganda…??. ALL the tall buildings around Kampala should bear a BIG sign post saying….. “BE AWARE OF FREE FALLING MEN PARK or STAND AT YOUR OWN RISK”!!. My own opinion anyway.

Mande Onesmas is he still alive? One thing that I still wonder about is, why can’t they go to worker’s house or communication house and the like if they really want to die. And they go on falling on people’s car. Why can’t they aim the tarmac

Sodium Msixteen It’s too bad for the station that is going on in uganda which has cause many people to commit suicide, i am writing his post not for the dead but for the living who judge the dead , because the same situation they go thru before committing suicide migh…See More

Sharon Countrygal Kyatusiimire is this a joke or what? may be these guys should actualy be charged. letting them go free will encourage other jumpers. suicide shouldn’t become an acceptable solution to any kind of problem

Moses Okipi …It’s time about now that a leaf is borrowed from my kinsman concerning the increasing suicidal tendencies. back then, and even most probably now; when such a case of suicide is reported, the victim is given close to 60 hot canes (dead or alive) in the presence of others just as a deterrent measure. So may be we should have canes around and wipe chaps!!!

Batenikwa Lagbarazio Edmondos Ogbonogba Hahahaha our commados and nijas … Behind the scene loading.but wait all these commados don’t die cud their be a juju short of thing protecting them or what, think of it otherwise some thing is wrong with the buldings.

Olet Jaspher That is what it means with the problems the ugandan youth are facing today. It should be one of the challenges our MPs should find a way of discussing about it in parliament rather than discussing their personal issues

John Bosco I commented abt more attempted suicides just yesterday!Are our leaders seeing this??Stress is too much&they hav to start acting.Most of these guys are youths looking for work.

Kituyi Uwo Buyeyi wo’Masayi Jennifer Musisi should demolish all buildings in Kampala and we see where they will attempt suicide again, unless they will switch to hanging on cobwebs

John Ariko That is the stupidity and naivity of Ugandans how does charging them address the problems that are creating these trends. It’s obvious these guys ate not suicidal by nature by driven by severe depression which is a mental sickness. Soon we shall then begin to charge those who suffer from malaria

Lwanga Michael Ke kazanyo akariko enaku zino, the only problem i have wiz these p’ple is that they damage cars, otherwise we living in a free country where jumping and falling is everyone’s right.

Jauhara Musana Nassuna Ts not funny these guys nid to be treated then after taken to butabika o imprisoned,thr setting abad example to our kids!!!

Monday Juma Sedrack Kyekyo.practice makes perfect.we need more jumpers pliz.since we are remaining with the likes of mapera, worker’s house and many more.pliz register for spider man’s jumping techniques .
Peter Lugai Today we are jumping from buildings, 2morrow you will see guys daring bullets. The bomb is ticking and political leaders should wake up and address the dire situation youths are going thru.

Algental Ibra Economic crisis in the country that caused those incidents. They have no hope to reset up their business after suffering losses. Naye tulagawa mu dduniya eno.

Maido da Maxima Amidst economical and political turmoils, psychological break downs are frequent as a result of stress due to related issues. Sorry for our nation.

Kizza Andrew if they want to die…..let them go to river nile preferably at itanda falls…they wont die in pain. but let me hope it’s not a new style of devorcing a wife

Sajja Daniel Pliz whoever feelz lyk dieing don’t wast our tym jst go to Mapeera has nd u through urslf down.Y do u wt to go upto Mulago?

Alinga Brenda Maybe they watched too much movies,should head 4 the tarmc nt pples’cars or is it because the 1st guy collected too much money frm the jump and they also wnt sme…

Opar K. Roger Japamora The judgement is easy for this people who survived.Judge them Death penalty straight and others will fear to participate in it.

Mwebaze Edward Mwebaze From which part of the country are they????
There’s need to trace their origins. Problems could be arising right from their homes

Yezu Sam Rasmak wats not happening. am startig to think there is someone behind this. y is it that they land on cars not ground

Strange how the youth and health ministries are silent in all these attempted suicides….See More

Josh Ronald Oh my God wats wrong with our people n y men only? Has this become a chronical desease? Surprisingly no one dies oba there’s someone sending these people for this drama….may be there’s anew religion

Mooka Stressfree Solomon Phd people are now competing and compainig for the post of superman ……whos next …………………..the one reading this post

Benitah Mbiine All dat showsthat pple are now jobless !!only work then can do is jumping over from plaza’s but govt instead of creating jobs you’re busy buying expensive cars pliz M7 twakowaaaaa

Yahya Senteza Theya about to say that Dr.Besigye is the one under this. Last time they said that he bribed olympians to come with nothing from Brazil kiri Uganda!!!!

Elisabeth Rugaju And people like this Status..hmmmm when do we really need to use the like button..?someone looses a loved one..we like.. this should really stop

Murshid Aqsam This is starting to be annoying. Why are they spoiling pipos cars!! Jazzel Pizzie Ssempebwa I told u there is a demon haunting these pipo

Jas Bwe Elly So this one fell on top of a Fuso or what?!? Well maybe its a flying demon that enters them

Morgan Banks Is this a new form of demonstration????
People are jst fade up of their own lives
Yamaaaweee

Nsonga Gastone Hmmmm, everyone has challenges…let them relocate to taller buildings like Sheraton and Charm towers….

Bonny Japusito There is some power behind this! It is not just suicide. Let’s go slow in this matter.

Razak Abdallah Let me tell u a story of aman wanted to comite suicide and unfortunately collided with the snake and cried for help! So people need to be sensitised about the lmpact

Palasco Franco Let’s not treat the symptoms.Let’s find out the exact cause of the increasing number of supermen in our country

Benjamin Chelangat Free jumping at KLA buildings. Come and train with us. We also give out invisible wings. Come one come all.

Kyomya Andrew In Japan every day they register 18suicide attempts, so thats nothing to us

Ronald BK Habby Who in the government is behind this ?????…..and y do they land on cars.
Police ekole okunonyereza

Nanyonga Eve why not drowning in water where they can’t damage anything??these boys are annoying chwweeee.

Nannyunja Harriet People no longer have faith and hope in the Lord…..when their situation hardens, they end up committing sucide

Paul Katumba it might appear as suicide when it’s actually murder. Let our corrupt force investigate

Peter Okurut Read the good book of God, the bible. It has good counsel for the depressed.

Justus B Mujuni They feel that they need to take shortcuts to reach God! The next will be Mp…

Hamya Amos Yes that iz the rizon i like uganda we have MPIGS ,SPIDERMEN UGANDA ZABU. tourist should come & be part of this venue state house we need more money 2 pay off these fools

Ssemwanga Stephen Our movie industry is growing very fast in just one month we have a superman ,spiderman,and now batman

Nasta Bugonzi Just take rat poison n die in your sleep than showing the whole world that u want to die or get a rope n look for a tree, hang your selves there. Stop spoiling ppls cars.

Bwambale Robert p’ple don’t joke with that situation.Very soon these p’ple will turn into suicide-bombers so that they die with others out of their frustration.How’ll you judge them after dieing with ur beloved ones???

Stuart Muwonge Rat poison does it more smoothly .Let them take that IF INDEED they want to die.

Kutaaga Edmond At this rate, am only becoming sympathetic to the car owners.

Davidrow Baks Instead of go’ng to a hiden place to commit da suicide, they do it in an open place so dat there lifez are rescued. Try it near me i will finish off ur life.

Hopeful Eyezac Kellow Etesot hahaha why to they target falling on vehicles? datz jst commedy let da serious ones go where there are no parked vehicles

Barigye Nobert King This one should be charged and imprisoned !

Mycor Lu We need a anger/stress control authority in Uganda.

Ivan Dyadi What z happening to uganans z some behind this.

Peter Eecqo Katwalo So they are targeting our innocent cars…???

Vukoni Edward stop popularising free fall suicide. bse some may just do it for popularity.

Achieng Clare Are people so hopeless and tired of life?

Moses Gahigi I Can’t Believe This My Friends, Coze I Know This Guy.

Dean Langalanga Wyze are ropes becoming expensive? because hanging is a sure deal!

Jacan Peter Stanley It has become a sort of drama.