Media › Forums › The Uganda Useless Elite Class › Yoweri Museveni is the Biggest Parasite in Uganda › What is this between Gashumba and nbs tv. .?

What is this between Gashumba and nbs tv. .? 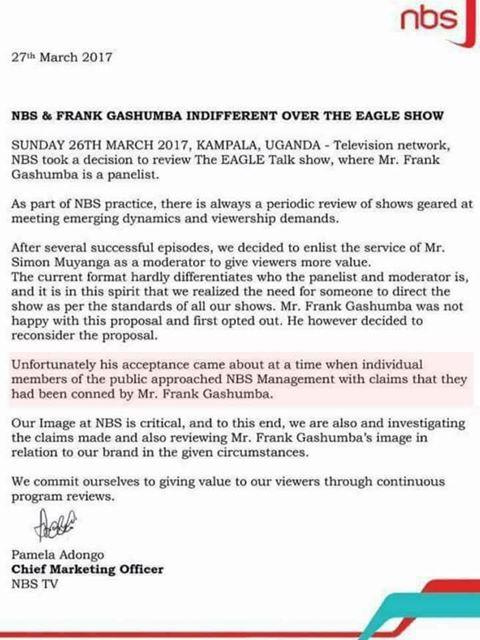 Frank Gashumba has misfired on this one. I don’t know why he is attacking Karisa over his ban from TV. I have always told people that Gashumba is another pastor abizayo and because these persons with disabilities are followed by disabled masses it becomes difficult for some of us to make people understand that their celebrities are needy beings who have just been hyped.

It was UCC that called Karisa and Karisa as a gentleman convened a meeting and suggested a way forward to manoeuvre around the system…he suggested they do two shows one weekly and another monthly. He also suggested Simon Muyanga Lutaya as the moderator…to direct the all-over show in the hands of Mivule and Gashumba… Gashumba failed to understand this or maybe he refused due to his personal issues and now he is on Facebook whining and cursing individuals like Simon Muyanga Lutaaya and Karisa…

And I think this is a fallacy in critical reasoning known as AD HOMINEM. (Attacking the person instead of the point). Why attack Muyanga and remind us that he lost an election… For God’s sake…he at least lost but some of us have never even contested.

Uganda is going nowhere mentally if the media houses keep on hyping such individuals at the expense of the intellectuals. When you look at our TVs they host people not because they know but because majority fools hearken to them. This is how we end up with COMMENTATORS at the loss of ANALYSTS. UCC said that Mivule and *Gashumba* are poisonous to the public but they did not unpack the poison in their show…let me tell you friends…the poison according to me who have been watching these shows is simple: while Gashumba assumes that he INSPIRES…the brother is struggling with the dictionary difference between INSPIRING and INCITING. UCC ought to have put it blunt that the brothers are literally not contributing to the country. I know a one Tamale mirundi who is more lethal than these two but he is still on air…let me tell you why: Tamale is not a commentator… He is an analyst… He has the facts and figures… He did political science and journalism… He is not a charlatan and neither is he an impostor like the two.

So friends: as for me I think Frank Gashumba should be attacking NBS and its administration. Karisa and the team are doing their work and they have to maintain their relations with the people who give them license. Mirundi is a smart monkey and smart monkeys do not shit where lions sleep. Unless if Frank wants to remain on Facebook and WhatsApp, he should stop attacking media. KISO KYA MBUZI. Dear Frank it is not Karisa and NBS who messed you up…it is UCC…so continue doing what you do best…curse the government. Please cut the ego and go back to NBS and take what you are given or start your own TV where you will be respected. Mbu karisa disrespected me, who should respect the other… The one with the program concept or the host who takes your views overseas. Do you know how many better program concepts are waiting.

When you are a media creation you must remember not to abuse and attack your creators. You might flop and disappear in no while.

I wish for could continue..but God bless you all and am sorry to those offended by the truth. Trust me surgery is a painful treatment.

I invoke Truth, Reason and Faith

Magezi Moses I think the dictator should close all media houses and feel comfortable. Man doesn’t need democracy…I equate it with what my teacher taught me about the clock aka in English that 7 IS 1

Adams Nabusagu So NBs investigated the matter and came to a conclusion that Frank is a conman or they acted on rumors. Its a total shame for our media.

Gad Ka Someone yes Said He was Conned by Frank Gashumba with promises to take them abroad on a trip with the president…
Mpawo atakiraba. Let’s keep 🤞 crossed

Buule Salim Saleh True but aside from defending a fellow… Ain’t u aware that the guy is a Ndyanabo! A kaloli.. Takuta.. Name it..

Mugisha Godfrey Kazungu we are in kamoli watching. I like it when Gashumba brings in Mengo as if mengo runs nbs.

Makanga Muwanga Allan It’s a dense press release and believe me it’s from a dense author.