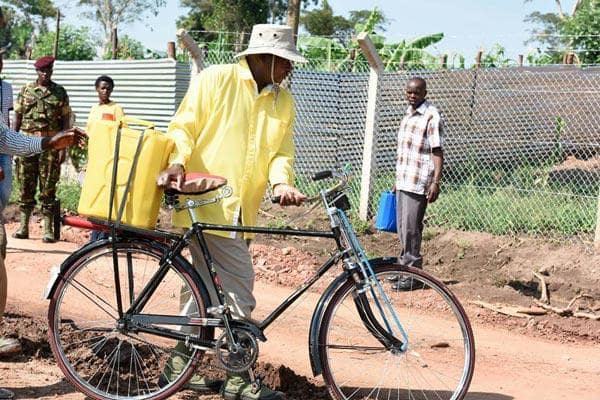 Kino eKISANJA KIJJASULA KAGUTA EDALU..at this age we are still relying on jerrycans to irrigate? yet we are preaching modernisation of agriculture? The same govt gave out hoes..now mbuza, ani abasigalizza mubwavu..we can even supply matoke to the European market because tetusoloba kulima quality and quantity.

According to reliable sources, the ruling NRM government has injected Shs200 billion in taxpayers’ money to rescue the bank that was on October 2o taken over by the Central Bank after it had fallen short of capital requirement stipulated in the Financial Institutions Act 2004 (Amended in 2016). Crane Bank saw profits of 50 billion Uganda shillings ($14.8 million, 13.4 million euros) in 2014 turn into a loss of 3 billion shillings in 2014.

Museveni’s Senior Presidential Press Secretary Don Wanyama told Free Uganda that he doesn’t have details of the two meetings but referred us to Bank of Uganda as concerns Museveni’s Shs200billion bailout to Crane Bank.

Coincidently, Mr. Jim Mugunga the Ministry of Finance spokesperson denied that the Shs200b was not given to Sudhir or Crane Bank but to the Central Bank to manage the monetary situation in Uganda as per Bank of Uganda’s mandate.

BOU’s Communcications director, Christine Alupo insisted that there is no money given to Crane Bank so far a statement that contradicted Ministry of Finance’s assertion.

The government has already indicated that it will not let Crane Bank, Uganda’s fourth biggest bank collapse but instead is preparing for strategic investors. One wonders whether the Shs 200billion cash injection literary means that Crane Bank has been nationalised and its business model reshaped to mirror that of the now defunct Uganda Commercial Bank (UCB) will not be heeded by the powers that be.

Critics complain the funds are being used to reward political royalty rather than innovation, skill or good corporate management.

How Sudhir’s pleas to Museveni paid off

Sudhir, 6o, is rumored to have contributed generously to part of President Museveni’s estimated campaign coffers of $231m (Shs773b) to secure a fifth elective term in office which majorly led to the current crisis in Crane Bank. One school of thought says that when Tresuary Secretary Keith Muhakanizi and BoU Govenor Tumusime Mutebile categorically refused to bankroll Museveni’s 2016 election like was the case with 2006 and 2011, Sudhir was the last option Museveni had. Before Sudhir released the undisclosed billions of shillings to Museveni’s camp, Crane Bank started looking after itsManaging Director and Sudhir’s second in command, A.R Kalani allegedly disappeared with up to Shs400billion to the United Kingdom.

A State House insider has intimated to TheUgandan that when Sudhir realized his utterances during an interview with a local tabloid about how Uganda’s economy was in a recession because of poor economic policies had angered President Museveni, he instantaneously sought for mercy from the big man. Sudhir paid lobbyists to enable him meet Museveni and the moved paid off.

It should be understood that last year, Sudhir publicly gave the ruling NRM party Shs 1billion as his contribution to the party’s intended new home yet to be constructed an act also that played a big role in making Museveni reach the deal to bail out his bank.

The story on October 23rd titled ‘MUSEVENI’S MAFIA MEN HAVE STOLEN MY BANK’.

“Thanks to Sudhir’s being a good cadre over the years, Mzee (Museveni) gave him audience for two days this week (Monday and Tuesday) before calling the treasury and ordered them to bailout Crane Bank,” a source privy to the meetings who asked not to be named due to the sensitivity of the matter revealed.

During the said clandestine meetings, a furious Museveni asked Sudhir why he would take his grievances and Uganda ‘s financial woes to the media which portrays his government in bad light. Our sources divulged that in the first meeting as Museveni went on with his reprimands, Sudhir was on his knees pledging for clemency and a chance to revive his ailing business.

Sudhir told Museveni how he naively allowed to have an earlier interview with the Red PepperEditor in Chief Ben Byarabaha who used his experience as a senior tabloid journalist to get sensitive information about the economy from him. Our insider said that President Museveni thereafter warned him not to ever again utter information that would make the state look weak to the public and the media without inquiring from him.

The president who had other meetings to attend to did not even bid farewell to Sudhir but walked out of the room and the tycoon was ushered out by State House employees. On the second day, Museveni’s aides called Sudhir to immediately show up in Entebbe which he did promptly looking weak and frightened because he didn’t know what fate awaited him and his ailing businesses. A top level informant says that Sudhir was that evening ready to sell all his businesses and leave the country if things went south with Museveni.

On reaching State House, Sudhir was hastily escorted into a room where he met Museveni still incensed from the previous day’s business. Museveni who is said to be intimidating and scary when he wants to be beckoned the embattled tycoon to sit down before he called the one of the top bosses at Ministry of Finance and the Treasury to ‘Look for a way of rescuing Crane Bank immediately with Shs200B and revert straight-way’.

In a feeble pose, Sudhir for the second time in 24 hours knelt down and thanked President Museveni for saving his business and promised not to misbehave again besides allowing him to stay in this beautiful country as Sudhir constantly calls Uganda.

On Wednesday, President Museveni meet Kampala leaders led by the minister for Kampala, Betty Kamya, to discuss the implementation of his Kisanja Hakuna Mchezo (no jokes term) in the capital as he bids to lead Uganda toward a middle-income status in 2020

The question over Crane Bank’s alleged bailout’s legality is one of those debates about the financial crisis and the government’s response that keeps coming up. The point is effectively mooted for now because many analysts are looking at the Shs 200 billion as a personal advance from President Museveni to his long time associate Ruparelia.