On May 25, 2016, the military tightened security at Defence Ministry headquarters in Mbuya, Kampala. 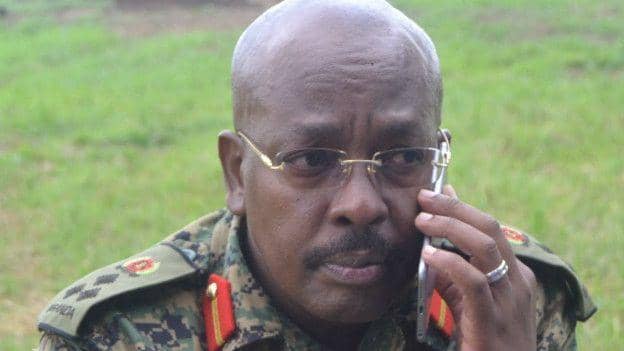 Of these generals were the promoted Brigadier and Chief of Staff Land Forces, Leopold Kyanda.

The flamboyant general is among the most feared generals in the UPDF; having served as Chief of Military Intelligence and Presidential Guard Brigade Commander.

Kyanda also had a stint as Uganda’s military attaché to United States.

His arrival at the defence headquarters was marked by pomp and grandeur as shinning pips were attached on his carefully pressed ceremonial uniform.

His face beaming with excitement, Kyanda would later shake hands with his promoted colleagues.

Usually, such promotions underscore trust of the commander-in-chief in the officers. It’s also viewed as a reward for loyalty, excellence and hard work.

But information obtained by ChimpReports shows Kyanda could lose his job as Chief of Staff.

Police and military intelligence have been asked to investigate a case where Kyanda is said to have connived with other officials and a suspected city conman identified as Sam Simbwa to defraud a polish company of 528,000 Euros (Shs 2bn).

In early 2015, a meeting was held at Bombo Army Headquarters Boardroom among UPDF officers and representatives of a Polish company known as BPM Poland located in Al Jerozolimskie, Warzawa.

The bogus defence contract negotiated from Bombo Military Headquarters boardroom
The Polish firm was informed by UPDF officers that they needed armour for battle tanks T-72; T-54/T-65, PT-76 and BMP-2.

They were further told to supply 6 Ferrets and 40 Elands – air portable light armoured cars, for reconnaissance.

The Polish contractors also were instructed to arrange for the supply of Armored Personnel Carriers (APCs) including Mambas and self-propelled artillery equipment.

A discussion on supply of the defence equipment ensued, leading to the signing of the ‘contract’ with BPM Poland Board Chairman, Marek Celer on October 7.

In what investigators believed was a ploy to rip off the Polish businessmen, a fake document was generated to show them that the payment process had been initiated by Ministry of Defence.

“We would greatly appreciate your executing this request at your earliest convenience within 7 working days,” Obiri reportedly wrote.

Highly placed sources say upon being showed this document, the Polish contractors were asked to send money to ‘Prima Investments Company’ to help in paper work.

On picking 528 Euros, the Ugandan dealers switched off their phones.

Simbwa was helped to escape from the country with a new government passport
In an email to investigators, a BPM official expressed shock that his consultant in Kampala “using the mobile number +256753633471” was “unfortunately since two weeks ago he is not answering our phone.”

The contractor said “upon dialing his number we receive the following recorded information: Sorry, the number you have called is currently switched off.”

The contractor further said their payments were deposited on Prima Investments Company account at Equity Bank.

“The Equity Bank also issued the security bond which was attached to our offer. We have paid only in cash 7,000 Euro for buying bidding documents. Altogether we have paid 528,000 Euro.”

Contacted, Army spokesperson Lt Col Paddy Ankunda said this was the first time he was hearing about the case.

“If they have reported the case at police, I am sure the relevant authorities will notify the UPDF and we will take necessary action,” said Ankunda.

“We will be interested in finding the truth,” he added.

But sources who preferred anonymity so as to speak freely said the case could collapse as the main suspect Simbwa was released by Police’s Special Investigations Unit Commander, Mark Odong due to pressure from Kyanda.

“When Simbwa was arrested by SIU, Kyanda ordered Odong to release him,” said a knowledgeable source.

“I have talked to Brigadier Kyanda. He told me he has never contacted Simbwa and does not know him,” said Ankunda.

“Kyanda further said he knows nothing about that deal and has never contacted Odong to release Simbwa,” said the spokesperson.

The case could expose army officers as allying with suspected criminals to use military offices to defraud unsuspecting foreign contractors.
“You don’t just enter Bombo. The clearance of accessing the boardroom was made at a higher level. This was nothing but facilitating fraud since the alleged defence requirements like armour were non-existent,” said a top source.

With the case on the verge of crumbling, the Polish contractors have since contacted Frank Mbarebyeki – Head Claims and Risk Management at Equity Bank Uganda Limited for support.

Mbarebyeki reportedly said he would analyze security camera archives at Equity Bank for “all the footage that were taken last year between the month of August and December in order to find out who used to come to the bank with the heads of Prima Investments.”

Officials in Poland have since given this investigative website a photo where Simbwa was posing with Polish contractors after signing the ‘defence contract.’

Informed sources said senior defence officials are aware about the scandal which is currently being kept as a top secret to avoid embarrassing the armed forces.

That foreign defence contractors can be robbed from the military headquarters is not only shocking but unthinkable,” a top source told this website.

Police officials contacted by this site described the matter as “extremely sensitive.”

Odong was not readily available for comment as he is attending a course at police training school in Bwebajja, off Entebbe Road.

We contacted the military intelligence boss Brigadier Charles Bakahumura on the matter but could not talk, saying he was attending a meeting.

He is tasked with gathering intelligence in all military institutions including Bombo.

Simbwa who would have helped investigations is thought to have left the country after obtaining a new passport indicating he was a government official.

“We are so frustrated that the Ugandan government couldn’t properly investigate this case after losing a lot of money. We gave them all the information needed but there is no progress in bringing the thieves to justice,” said a source in Poland.