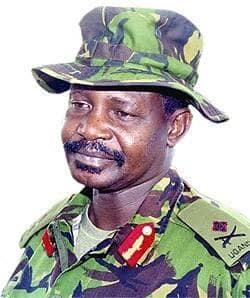 Yet his moral compass was more upright than the fallen AIGP who publicly defended the slaughter of innocent and unarmed civilians of Kasese.

General Kazini was a gallant soldier who vigorously defended the sovereignty of Uganda against both internal and external aggressions.
Compare him with the butcher of Kasese sergeant Elwelu who the late Felix Kawesi defended. As much as Kazini had his weakness and thus doesn’t qualify him for sainthood but he was a disciplined commander who could separate the distinction between armed combatants and civilians.
He had the knack of disobeying unlawful orders and to me he died a hero .
For example, when asked why he had disobeyed President Museveni orders forbidding him from helping Congolese businesses, Gen. Kazini replied politely: I did not contradict the President, I was only being flexible your lordship.

When handing over to the late Aronda, Kazini regretted that he had failed to quell the LRA rebellion under his tenure. He had promised to resign if the LRA had not been defeated by December 31, 2002.

Also in 2002, as if dogged by bad omen, the then ethics minister, Miria Matembe, asked Kazini to declare 200 bags of cement and a cow that the Kasese business community had donated to him.

The cement was for construction of a hotel in the district, but also an appreciation for helping rid the district of rebels. The then IGG, Jotham Tumwesigye demanded that Kazini complies as per the Leadership Code.

Bottomline is I want a class of Ugandans who think they hold the high moral ground in exhibiting double standards.