Kahinda Otafiire is an ICC candidate

OTAFIIRE HAS NO PROPER MILITARY TRAINING TOO AND IS AN ICC CANDIDATE. 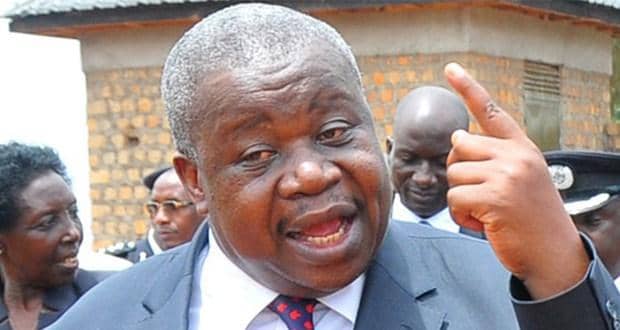 Gen. Kahinda Otafiire is Museveni’s Minister of Justice and constitutional Affairs. He is the the outgoing Member of Parliament for Ruhinda in the Bushenyi sub region.He never at one time throughout the five years of the bush war got involved in combat not because he was incapable or a coward but because Museveni did not want him to. This was the same case with the likes of Mushega, Butime, Kigongo, Kategaya, Mbabazi, Dr. Kamanyire, Katenta Apuuli, and others. Museveni kept them off the mainstream military service in order to control their influence in the military while at the sametine ensuring that his Hima dominated the top command positions of the military. Around 1985 when the NRA had established an interim administration in the western region, Museveni sent Otafiire to Rwanda’s Habyarimaana to secure veterinary drugs for the cows in Nyabushozi.
After taking over the government, Gen. Otafiire was one of such people who were assigned to civilian executive positions. When he threatened to shoot the wife of Sam Kuteesa for having called him a Mwiru, he had to resign his ministerial post. Instead Museveni appointed him to head his External Security Organisation (ESO) – a spy outfit charged with gathering external intelligence and assassination of dissidents. When formal ranks were introduced in 1987, Gen. Otafiire like his colleagues in that category were supposed to be awarded only honorary army ranks just for ceremonial purposes.

1.During his reign at ESO, the country witnessed among other security scandals, the killing of Congolese gold dealers by a notorious ESO operative Humphrey Babukiika.
2.The same Otafiire used Lt. Col. Ronald Kawuma in infiltrating dissidents in Kenya where he declared war on the Museveni regime before Otafiire turned around against Kawuma who was incarcerated in Makindye dungeons where he died.
3.Otafiire used his position in the regime to steal cooper rivets from an Indian businessman in Uganda.
4. He is an ICC candidate because of what he did in DRC.